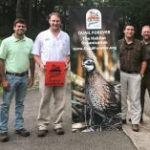 Birmingham, Ala. – Quail Forever continues to expand its mission in the Southeast with the formation of the Black Warrior Chapter of Quail Forever in Birmingham, Alabama. Volunteers are focusing on habitat improvements and conservation education to create positive impacts for bobwhite quail and other wildlife in the Greater Birmingham region.

“We’re excited to bring a new chapter of Quail Forever to the largest population center in Alabama and make it available for those passionate about hunting and conservation,” stated Cullen Wiggins, president of the Black Warrior Chapter of Quail Forever. “The committee looks forward to improving habitat and bringing to light the challenges and opportunities quail have in the 21st century, and we hope others will help support a quail comeback in our state.”

Quail populations in Alabama have seen a consistent decline since the mid 1980’s due to changing land use practices, but success stories can still be highlighted throughout the state thanks to conservation advocates paving a new path for the Southeast’s most iconic bird. The Alabama Department of Conservation & Natural Resources has shown a renewed interest in quail management in recent years, including the creation of focal areas for bobwhites and habitat project implementation to restore bobwhite populations to 1980’s levels. The Black Warrior Chapter of Quail Forever will utilize the organization’s unique local approach to help fund similar projects and initiatives to reestablish the glory days of quail habitat and bobwhite hunting in Alabama.